I’ve been using TiddlyWiki for note-taking for a few years. I use them to keep track of my technical notes and checklists. TiddlyWiki is a brilliant piece of software. It is a single HTML file with a note-taking interface, where the notes you take are stored directly in the HTML file itself, so you can easily carry (copy) the file around and easily deploy it online for sharing. However, most modern browsers don’t allow web pages to access the filesystem, so in order to let TiddlyWiki save the notes, you need to rely on browser extensions or Dropbox integration service like TiddlyWiki in the Sky. But they still have some frictions.

So recently I started to look for other alternatives for note-taking. Here are some of the requirements I desire:

TiddlyWiki excels at 1 to 5, and I can easily sync it with Dropbox. However, I often forgot to click “save” in TiddlyWiki, and in some case when I accidentally create some conflict while syncing, Dropbox simply creates two copies and I have to manually merge them. There is also no version history so it’s hard to merge and look into the history.

Then I suddenly had an epiphany during shower: all I need is a bunch of Markdown files, version controlled by git, then I can use a static site generator to render them as HTML, with table of contents and client-side search. After some quick search I found MkDocs, which is a Python-based static-site generator for project documentations. It also have a live-reloading development server, which I really love.

MkDocs is really straight-forward to setup and use (under Linux). To install, simply use pip (assuming you have Python and pip installed):

Then you can create your document folder using

The generated folder will have the following structure:

You can then start to write documents in the docs folder. You can create subfolders to organize the Markdown files. To view the generated HTML, cd into the project folder, then run mkdocs serve, the development server will start to serve on port 8000. Opening 127.0.0.1:8000 in your browser then you can see the document. You can also run mkdocs build to generate the static HTML into the sites folder. The folder can then be hosted using any server. 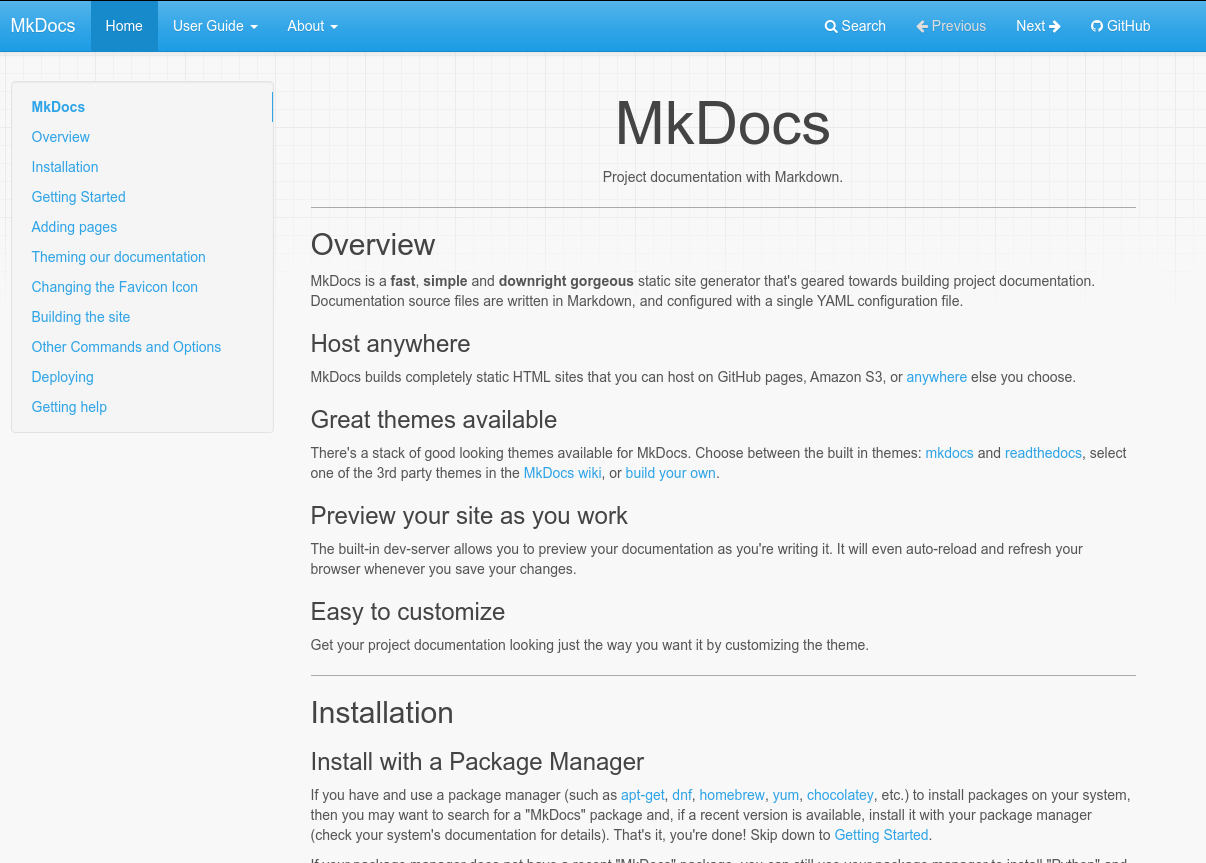 The mkdocs.yml file contains some configuration. For example, you can use the ReadTheDocs theme by adding the line: 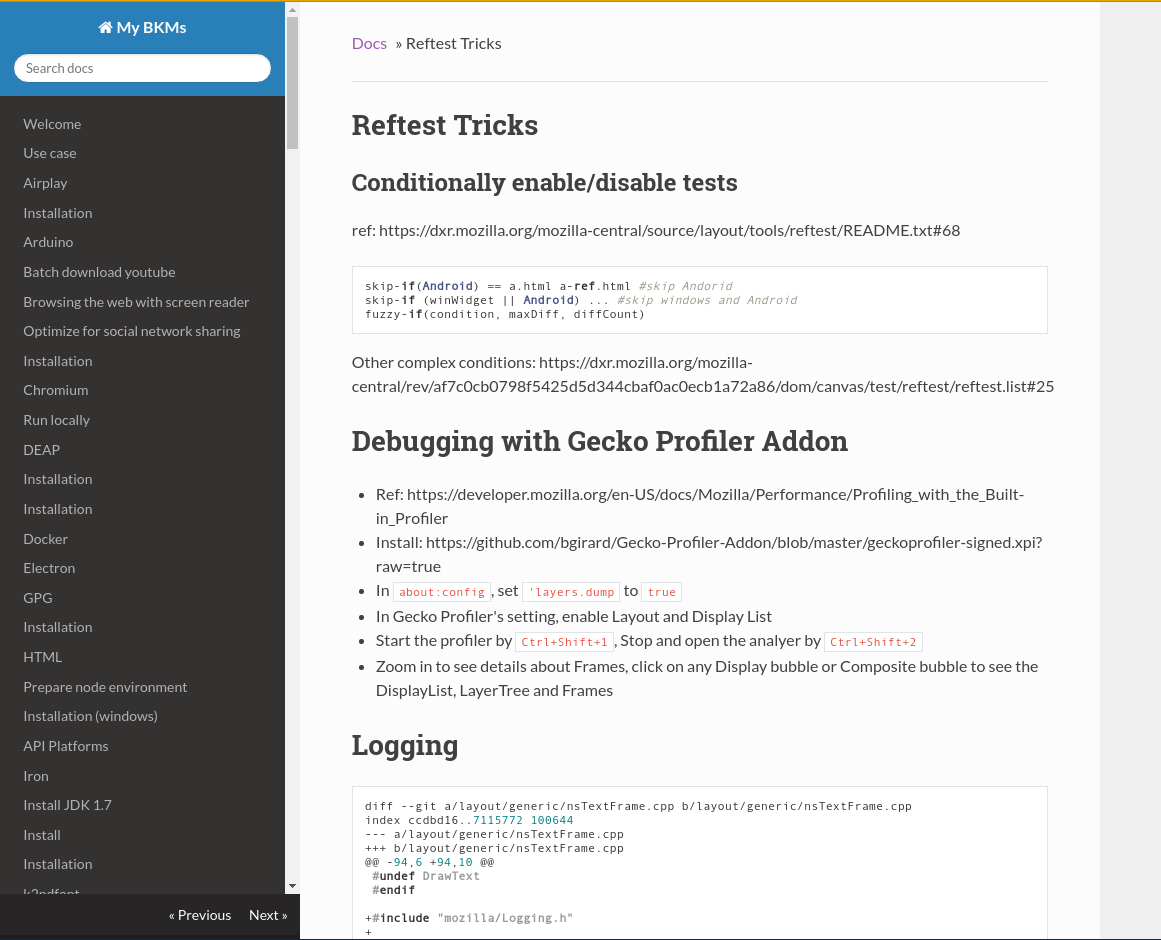 If you wish to open the generated site locally using the file:// protocol, you can add this line:

When you have a note named foo.md, the generated file will be /foo/index.html. If use_directory_urls is set to true, the URL for linking to the foo.md page will be /foo/, which is a more modern URL naming convention. But for this routing to work, you must host the files in a web server. If you want to open it locally, you need to set the config to false and all the link will be /foo/index.html instead.

Moving all the notes from TiddlyWiki to MkDocs is very easy. If you are using TiddlyWiki 5.x+, you can go to “Tools” right under the search box, there is a “export all” button. Export the tiddlers (notes) to CSV. Then you can use the tiddly2md script to convert the CSV to individual .md files. If your tiddler has UTF-8 titles, you need to add a parameter encoding='utf-8' to the pd.read_csv() call in the script for it to work.

The exported Markdown files will lose the tag information, so if you are using tag as folder structure like me, you’ll have to manually create folders to arrange them. Some tiddlers using the old WikiText format will also be empty (I use Markdown in my TiddlyWiki, but there are some old ones from the old versions). You can use ls -lS to see which file has no content and manually fix them. After the .md files are in place, run mkdocs as usual.

MkDocs is a pretty simple but powerful tool for note-taking. You get all the benefit of editing the notes using plain text editor, and have them version controlled by git. But you also get a nicely rendered HTML version with search functionality. One thing I miss from TiddlyWiki is the ability to generate a single HTML file containing all the notes. (MkDocs generates a folder of separate HTML, CSS and JS files.) There are some scripts like mkdocs-combine that claims to do this using Pandoc, but I haven’t tested them.

Check out my new book: